Over the last two days nsquared’s James McCutcheon has been presenting with Mike Shughrue from Microsoft on Live Services as part of the "Live Services Jumpstart" tour. The Live Framework is one of the most exciting technology advancements we have seen for a long while - Microsoft has really nailed this SAAS model.

James and Mike have a "Hands on Lab" travelling with them in the Live Services Jumpstart tour so that developers can listen to the presentation and then walk into the lab room afterwards and try out what was discussed. James is busy developing some additional examples which we promise to share, so watch this blog over the coming weeks.

James and Mike will next move to Warsaw where they are looking forward to meeting more developers and spreading the Live Services love. Feel free to grab James and say hello, and tell him what you think of Live Services. To see when they are moving through a town near you, check out the www.lsjumpstart.com website, and come and say hi!
Posted by maridee at 2:24 PM No comments:

First, take a look at Windows 7. There are a number of user experience improvements and some brand new inno

vations to explore. A new task bar includes hot links on the icons for easy access to recent and frequently used documents. The desktop has a new Personalize option that allows for a desktop backgrounds slide show – use the Windows pictures or combine them with your own and control them to rotate on a fixed schedule. When you float your pointer over the task bar, it now shows a mini of every open item, even if there are multiple screens in an application or multiple web page tabs open in the same window.

Next we are working with multitouch screens. These fantastic display screens allow navigation without interaction with the mouse – use your fingers instead! There is even an option to open a keyboard and type right on the screen. If you have a multitouch screen combined with Win7, you can resize the desktop icons by growing them with your fingers, and you can have more than one person interacting with the screen at one time.
We are also working on some projects for Microsoft Surface. nsquared built the Surface hands on labs for the PDC which were very highly rated. The Surface simulator works on the HP TouchSmart multitouch screens allowing us to test some of the multitouch features of Surface at our desktop.

Sneak Peak: we are working on some cool proof of concepts for Semblio on Surface , can’t say any more than that for now…
Posted by maridee at 5:01 PM No comments:

nsquared services to the rescue

A big thanks goes to Luis for mounting the white board! 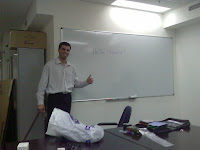 Posted by maridee at 9:20 PM No comments:

nsquared is expanding! After filling up the offices on Level 6, 109 Pitt Street, we have acquired offices on Level 8 to accommodate our growing staff. Last week the developers moved to the new space, and apart from some minor difficulties with the whiteboard (a big thank you goes to Luis of nsquared services for his tenacious assistance), everything went smoothly.

The new office is a wide open area with the developers situated in a large rectangle facing one other. They are enjoying their new space. “More open space allows the team to have better interaction,” says Dimaz, Software Design Engineer. He also appreciates the larger desks that the area affords. 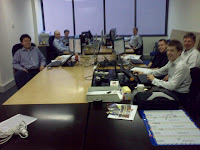 In addition to the new space, nsquared brought on their first technical writer, Maridee O’Day, from Seattle. Maridee started with the company four weeks ago in the Kirkland office, and with the addition of the new office space she was able to join the team in Sydney almost immediately. Maridee brings five years of experience in writing technical documentation for Seattle based Costco Wholesale and John L. Scott Real Estate. 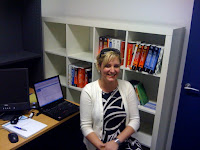 nsquared needs to keep filling our new office space - contact us to join the team!
Posted by maridee at 3:42 PM No comments:

nsquared Welcomes you to Liberation Day!

Join us today at Liberation Day to bring in a new dawn for developers with the freedom of software + services! nsquared will be there and we’re hiring!

Liberation Day 2008 presents Microsoft CEO Steve Ballmer as the key speaker in A Live Web Rally. Steve B will specifically address the subject of Cloud Computing. He is joined by Gianpaolo Carraro (Microsoft Senior Director) who will guide attendees through the Microsoft Azure Platform realities and possibilities, and Tim Sneath (Microsoft Director) who will speak on how you can use liberating technologies such as Windows 7 to build application for Windows and the web.

nsquared contributed to Liberation Day by building a WPF application just for this event. If you aren’t able to join us at the event but want to watch the live stream, read the speakers blogs or participate in a real time chat, go to the main Live Rally site and follow the links under Enhance the Experience section.

The download and install link will ensure you have the minimal dependencies installed (Client only components of the .NET Framework 3.5 SP1), before installing and launching the Event Client.

Once downloaded, you will see the window for the web stream. 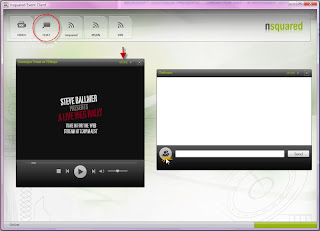 · Click the MORE link in the window to change the resolution or view additional videos.
· Click on the CHAT button at the top of the screen to start chatting.
· Supply a nickname and away you go!
· Click the button to see who else is online.

Look out for the nsquared crew either in the chatroom or at the event.

See you at Liberation Day!

If not at the opening address, PDC wreaked tangible excitement by the end of Day 4. Developers left upbeat and charged, ready to start grappling with the new concepts and tools at home. Though there was much pre-release content, we can expect to see more tools emerging in the next 6-12 months around these.

Windows Azure, interesting if not quite new, left me begging for an answer... What will they charge for it? Will it prove valuable and worth the cost no matter what they decide? The market will determine the value – but which market? The price, in fact, will determine the market.

The overall opinion of the Microsoft Directors seems to be that Windows 7 is a strong offering. While Vista was a nice change and brought many enhancements to Windows, I agree that there are definitely places for improvement. Windows 7 looks like it will do at least one trick by reducing the drag on system resources.

Microsoft Surface will have people creating a business need for it where there wasn’t one before, if only because it is so cool. The Day 3 Keynote (absolutely magical) demonstrated some research technology transporting Surface into the 3D world. Amazing.

By the way, nsquared built the labs for Surface which were well received at the conference. nsquared also contributed by acting as the technical advisors for the Windows Live Framework and Windows Live Services, 2-sided poster, and working on the Visual Studio Tools for Windows Azure.

All in all, the conference delivered on its promise and reputation, that of being the champion gathering of developers and architects worldwide...on the surface... and in the clouds.
Posted by maridee at 4:59 PM No comments: