Mixing and Matching it with Surface

Mixing it up on his second to last engagement of what has been a busy nsquared training month, Dr. Neil has been doing what he does best -not just touching the future of computing, but getting his hands all over it. NUIs are in and GUIs are now passé…… 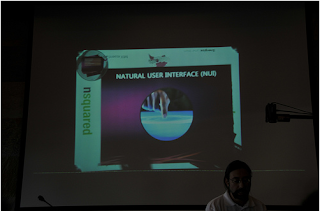 In the Netherlands for the MIX Essentials conference, Dr. Neil led a number of Microsoft Surface Development workshops for MIX participants where he demonstrated the unique features of Microsoft Surface. Dr. Neil also tried something new - instead of plain old PowerPoint slides, he used the actual Surface device and projected the content onto a screen for all to see.

Dr. Neil regularly encourages developers to write with the distinctiveSurface NUI (Natural User Interface) features in mind and with the express intention of inspiring users to get involved with and enjoy the new opportunities that Surface presents. Perhaps the point he is making is that developers shouldn’t be working around the Surface development platform characteristics, but rather, working with the unique features to create the incredibly rich and wondrous user experiences that Surface can provide. “Surface is meant as a Natural User Interface,” said Dr. Neil, “so your apps had better adhere to that”.

Here's our challenge to you - what can do with Surface? If you possess WPF skills, you're set to go! Check out the Surface website.
Picture of Neil presenting Surface credited to Jeroen of the Netherlands at http://wiert.wordpress.com.
Posted by maridee at 9:03 PM No comments:

nsquared is proud to announce the completion of yet another top secret project!

nsquared partnered with Microsoft to aid John L. Scott Real Estate (a major US real estate company) in bringing Windows Live Services to their web site. John L. Scott was looking for a way to attract users and agents by providing a unique service unlike any other real estate company. nsquared put together various samples and documentation on how to implement the Live Services and helped create JLSConnect.

JLSConnect utilizes the software-plus-services approach where a Silverlight browser plug-in on user desktops combines with web-based services to allow consumers to share and exchange comments about real estate properties with others. This innovative solution takes advantage of Windows Live ID to sign into the site, Windows Live Messenger to chat live, Windows Live Presence to see who is online, and Microsoft Virtual Earth to help users visualize locations.

Check out the Microsoft case studies at here and here for more information.

Let us know if YOU need help with Windows Live, and remember we are good at keeping secrets! :)
Posted by maridee at 4:22 PM No comments:

Translator on your iPhone?

Imagine landing in a foreign country with the luxury of a Translator in your iPhone and at your fingertips?

Sounds handy, doesn’t it? But for now Apple’s iPhone group is saying that you’ll have to wait.
This clever piece of software has been developed by our very own Dr. Neil using Microsoft Translator Services. It allows owners to input text in any of the supported languages and to have the text returned in the supported language of choosing.

Coupled with the iPhone’s multilingual keyboards this app is as handy as they come and will prove to be exceptionally useful for business travelers, holiday makers and those of us who are just plain inquisitive. 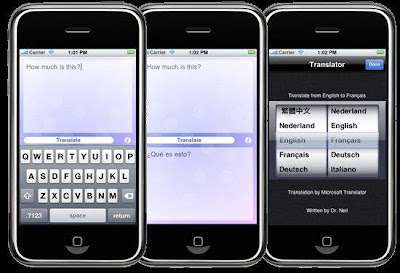 The trouble is, the iPhone Translator app has been vetoed by the App Store because it allows users to input “rude” words into the free form text box. So, for now at least, no matter how much you really want it, you’re going to have to wait at least until Apple takes another look, or until the app is upgraded so that it recognises rude words in all of the 14 supported languages and refuses to let you enter them.

The iPhone Translator app might not be all your dreams come true, but if not we’d like to help you make them happen. Take a look at what we do at http://www.nsquaredsolutions.com/
Posted by maridee at 4:19 PM No comments:

Email ThisBlogThis!Share to TwitterShare to FacebookShare to Pinterest
Labels: iphone

What were they thinking??!!
How is it that popularizing the abuse and murder of infants is encouraged by Apple, and that learning new languages isn’t?

“Apple needs to get its act together and fast,” says Dr. Neil of nsquared.

Here in the office, we’re agreeing with him whole-heartedly. We’re asking: How can a game that encourages such violence be released for sale to the very demographic that is most at risk of carrying out the behaviour??

This is especially mind blowing when we know that Dr. Neil’s iPhone Translator application is still not approved by Apple because….and wait for it…..users are allowed to enter rude words into the free form translator text entry box.

Hang on a second.. Apple says it ok to encourage the abuse and murder of infants, but it’s not ok to use rude words???

Apple does need to get its act together, and fast.

In the meantime, if you’re looking for sensational software solutions for your latest needs, desires and wants, give us a call on +612 9233 5355, or email us at admin@nsquaredsolutions.com

Ciao for now!
Posted by maridee at 3:39 PM No comments:

Startup of the Day

Have a need for experts in the field of Microsoft Surface and Windows 7 Multi-Touch? nsquared recently partnered with AFTER-MOUSE.COM to enhance our ability to create innovative tactile experiences.


French CEO Nicolas Chaillan got the idea for the company in December of 2008 when he first interacted with a Microsoft Surface unit. The company has grown to 20 employees in just five months with a presence in five countries.


nsquared has been working closely with Microsoft to support Surface training and development. nsquared makes the ideal partner for AFTER-MOUSE.COM to help provide extensive support, building concepts and applications.

Read more about the Startup of the Day here.

Posted by maridee at 8:38 PM No comments:

The Virtual Earth Developer's contest submission deadline has passed, and it's time for the voting! The articles have much to offer in the way of Virtual Earth knowledge and expose so many possible uses for Virtual Earth! If you are a developer who is interested in this technology, take a look at the articles and give them YOUR rating.

Posted by maridee at 4:35 PM No comments:

nsquared's very own Pierce has been Blending like a mad man! He tells me (in his Expressive way) that he uses it because "it makes some things easier".


Hmmm, I guess that means that although he has been immersed for 30 hours, he's pretty ambivalent, but then, maybe that's just Pierce. So I dug a bit deeper....


Pierce likes that Blend has a GUI for editing xaml properties, but dislikes it because Visual Studio still renders better than Blend. He's excited about the Expression Blend 3 intellisense and looks forward to enhancing more of our top secret projects with his rapidly increasing skillset. While you know we can't talk about the applications for which Pierce is Blending, we thank him for all his extra hard work this week!
Posted by maridee at 9:44 PM No comments:

Touch the Surface of Computing with Service Pack 1

The release of Surface 1.0 Service Pack 1 was announced today by Microsoft at TechEd in the US. nsquared is particularly excited about this since we have had hands on experience with the new technologies. Some of our favorite ehhancements are:

nsquared has been heavily involved in Surface training and education. Contact us to bring a training session to your town! 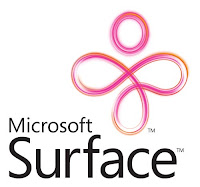 Posted by maridee at 5:04 PM No comments: 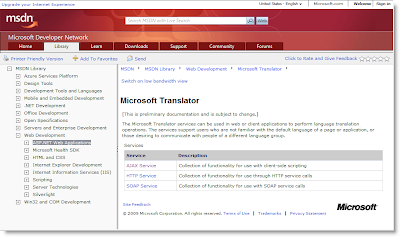 Email ThisBlogThis!Share to TwitterShare to FacebookShare to Pinterest
Labels: Translator

nsquared has a new look! 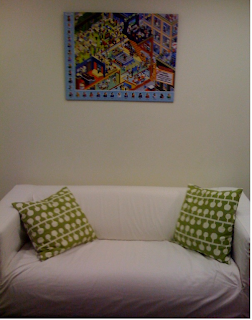 Aside from our usual coding and writing, last week was all about creating a comfortable living space. We've framed our posters, stuffed our pillows, and decorated our walls, and we're loving our fresh look. Our newest member, Kris, has been wonderful in helping add warmth to the place in spirit, style, and tidiness. Thanks Kris! 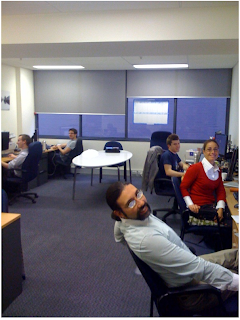